From Mumbai to Morocco, Beirut to Jamaica, local legends on street corners to cooks racking up hits on Youtube, here’s 10 of our top food heroes from around the world, picked out by KERB founder/culinary globe trotter, Petra Barran and our traders ?

People always ask us what makes a great street food trader, and we can reel off a list of tickables – from passion to talent to grit to aesthetics, but here are some of the people that we’ve encountered who, through total dedication and love for what they do, bring that all important something extra that transcends any of the textbook ‘How to…’. We salute them and strive to bring just some of the magic that they embody through their food. 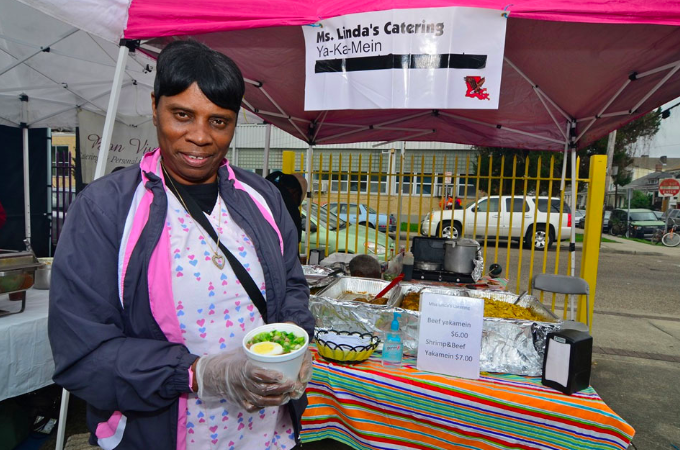 Linda Green, the ya-ka-mein lady who serves “the best damn cup of noodles in NOLA” (KERBlaboration please with our Kaki Lima?) is street food royalty in the city where cooking is at the fore of almost every conversation. Known as the ultimate hangover cure, this historically ambiguous beefy broth (our money’s on the early Chinese labourers influence), full of egg, spaghetti and green onions, is sold at second lines, grocery stores, jazz clubs and petrol stations – but make no mistake, the special touch of Ms Linda’s seasoning makes hers the most sought after. Just make sure you’re hungry – there’s a lot going on in that cuppa soup. Meet Linda.

The abiding memory is of the sizzle of the fried pine nuts as they are poured onto cool yoghurt…Beirut shows you what it is to take great pleasure in serving and sharing food. It isn’t learnt in a manual or at staff training days, it’s innate and intimately tied to what it is to…BE. At Al Soussi, the anguish of infinite choice is removed by the straightforward menu and its confident and generous execution. Sit back at that plastic table, let it become filled with bowls of food you didn’t know you’d been missing – msabbaha, fatteh, foul, eggs and awarma – deftly spun at the 2m/2m kitchen, an ergonomic mastery of fire, spice and time. Watch it cooking. 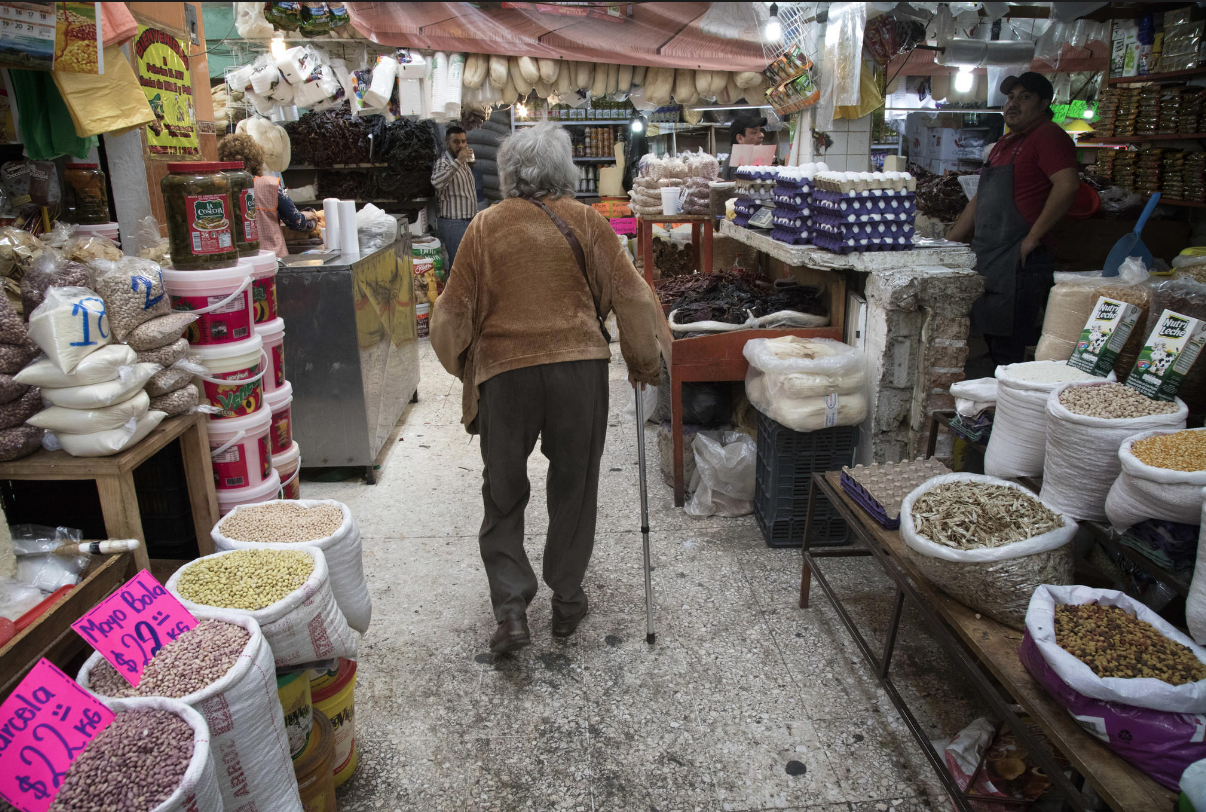 Taco Dave’s icon: the indomitable DIANA KENNEDY. “In the eyes of those that know anything about traditional Mexican cooking, Diana Kennedy is a titan. She is in her late 90s and lives alone in an off-grid eco-house that she designed and built in the 1970s, located in the state of Michoacán in Mexico. She has spent decades travelling around Mexico, researching traditional recipes, techniques and ingredients, documenting and cataloguing them and publishing many cookbooks throughout her life. She holds the highest honour that Mexico can bestow upon a foreigner (Order of the Aztec Eagle) as well as an OBE. Oh yeah, did I forget to mention that she’s EFFING ENGLISH! Despite all of this, Diana Kennedy is virtually unknown in this country and it is a travesty. She is the foremost authority on one of the most famous and respected cuisines on earth and nobody has ever heard of her in her home country. There is actually a film coming out about her soon called “Diana Kennedy: Nothing Fancy” so this travesty should soon be rectified.. 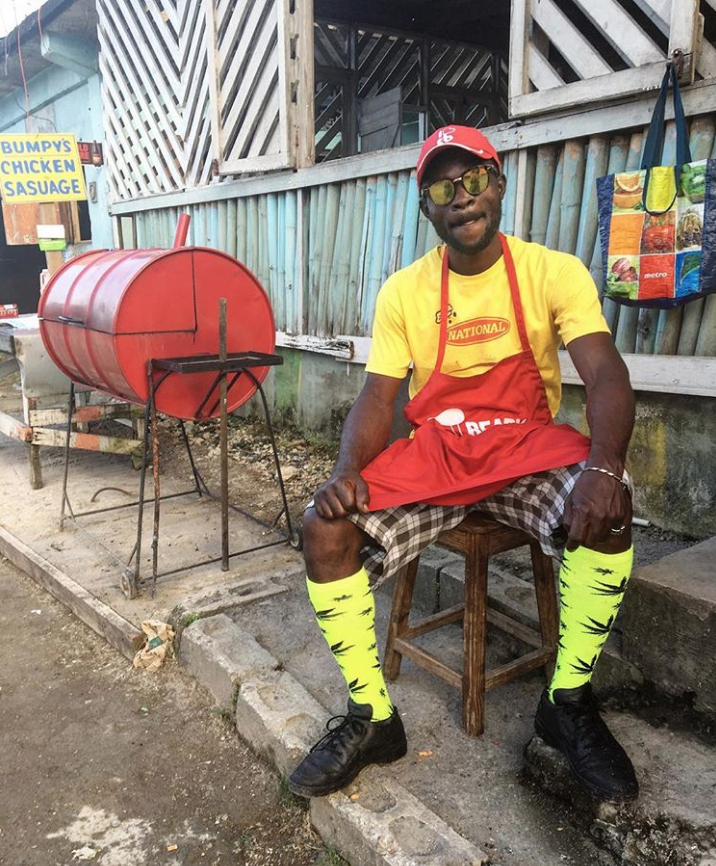 In the 90s, Boston Jerk Centre was a series of big jerk pits where pimento smoked pork, fish and chicken would be unearthed from its magical, fiery depths. Your lips would pulsate with heat and your fingers would glisten with juicy, blackened debris while you leant back against a tree, trying to steady yourself. So returning there 20 years later, it was a bit gutting to discover that elfnsafety had infiltrated the pits and brought everything above ground. Gutting that was, until Bumpy came into our lives with his neat little red jerk drum, smoking jerk chicken sausages to bring you readily into the present day. The juicy fug as he lifts that lid, the beautiful Scotch Bonnet and pimento studded bangers, but most of all, the fire banter and sartorial flair that he delivers make him – and his sausages – a must find next time you’re roaming around Jamaica, looking for treasure. 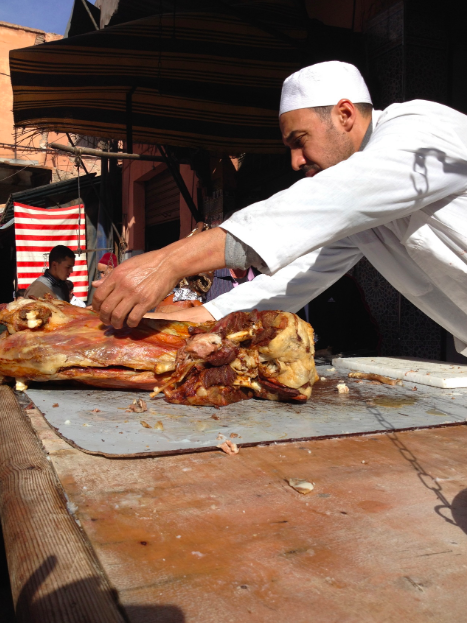 “A young couple ordered the head and watched as the man weighed it, wrapped it in paper and then shoved it into a plastic bag. Off they went, looking pretty perky. An old Berber man loitered lasciviously on the sidelines and whispered something in the meat-handler’s ear. With a nonchalant look he opened the lamb up, pulled out a shiny white kidney and gave it to the Berber who tossed it into his mouth with glee. Squelch, squelch, went his jowels as his white whiskers glossed up then off he went about his business”.

One from the old KERB Tumblr! Here’s what happened when, Petra Barran got struck by the berber “pulling a lamb out of a hole in the ground and hacking that old rascal up” down the back alleys of Marrakech.

Another bit of comedy gold, brought to our attention by inKERBator, Swati Kandala of Curry on Naanstop: “Every Indian household follows his YouTube videos and I find him very inspirational as he thinks everyone can cook. Every dish he shares he makes it fun by telling a story of a dish or some sort of background. He will make you laugh too.” Watch him make Palm Wine chicken toddy: “the most important thing you need for making this dish – to be highhhhh on toddy, which I am”. What a lad. 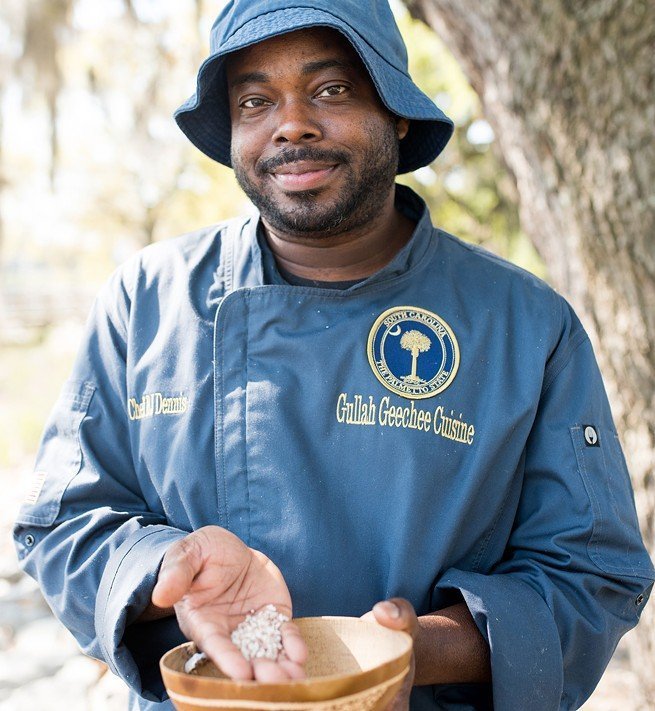 KERB Alumni, Decatur’s pick:  “A chef from the Gullah Geechee Islands of South Carolina; BJ Dennis has been one of the key figures in educating a wider audience on the influence of West Africa in modern Southern American cooking. Though without a restaurant, BJ’s work in bringing the cuisine of the coastal Gullah Islands of South Carolina out of the shadows and into the spotlight on a national (in the US) level, act as inspiration to anyone with a story to tell about ‘their’ food. His cooking is amazing and the history and culture that he tells with his cooking is vital and should be celebrated. Southern food for me is really one of the world’s great cuisines and without people of colour there would be no southern food as we know it. BJ Dennis (along with Therese Nelson, Michael W Twitty, Nicole Taylor and countless others) have been helping to redress the balance of white chefs controlling the narrative around Southern Food, which has been the case for so long – it’s refreshing and so important and why BJ is one of my food heroes”.

Discovered by ‘The Flygerian Sisters’ on their travels: this young man trades under the name ‘University Suya’ and dusts great hunks of steak with Suya spices by the roadside?“The number 1 street food in Nigeria is Suya and this place is one of the best joints to eat it – a traditional smoked, spiced, melt in your mouth beef. Locals wash it down with a bottle of Guinness, (the number 1# alcohol consumed in Nigeria followed by a non-alcoholic malt drink, Super-Malt)”, Jess and Jo Edun. 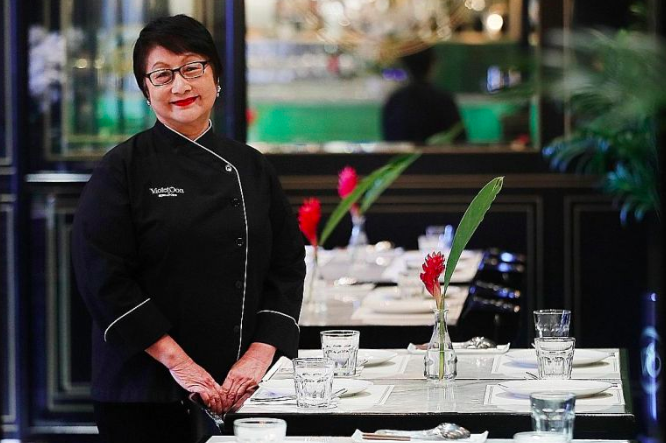 “Violet Oon is a local food hero in Singapore who specialises in Peranakan/Nyonya cuisine and we believe her fame should be spread much wider. Peranakan is fusion cuisine at its finest and truly reflects the melting pot that is Singapore. The word Peranakan roughly translates to ‘locally born and bred’, but in practice locally it meant that Chinese immigrants married locals; resulting in a unique culture with entirely new traditions. As a result, Peranakan cuisine is a fusion of Chinese ingredients and Malaysian/Indonesian spices and cooking methods.

Violet started her career in journalism in 1971 but quickly became focused just on food. In 1974 she became a food critic for The New Nation and then in 1987 she started her own culinary magazine called The Food Paper. It was only in the 1990’s that she left her desk and picked up an apron. Today you can try her food at one of her three restaurants in Singapore; National Kitchen, Violet Oon Satay Bar and Grill, or Violet Oon Singapore.” 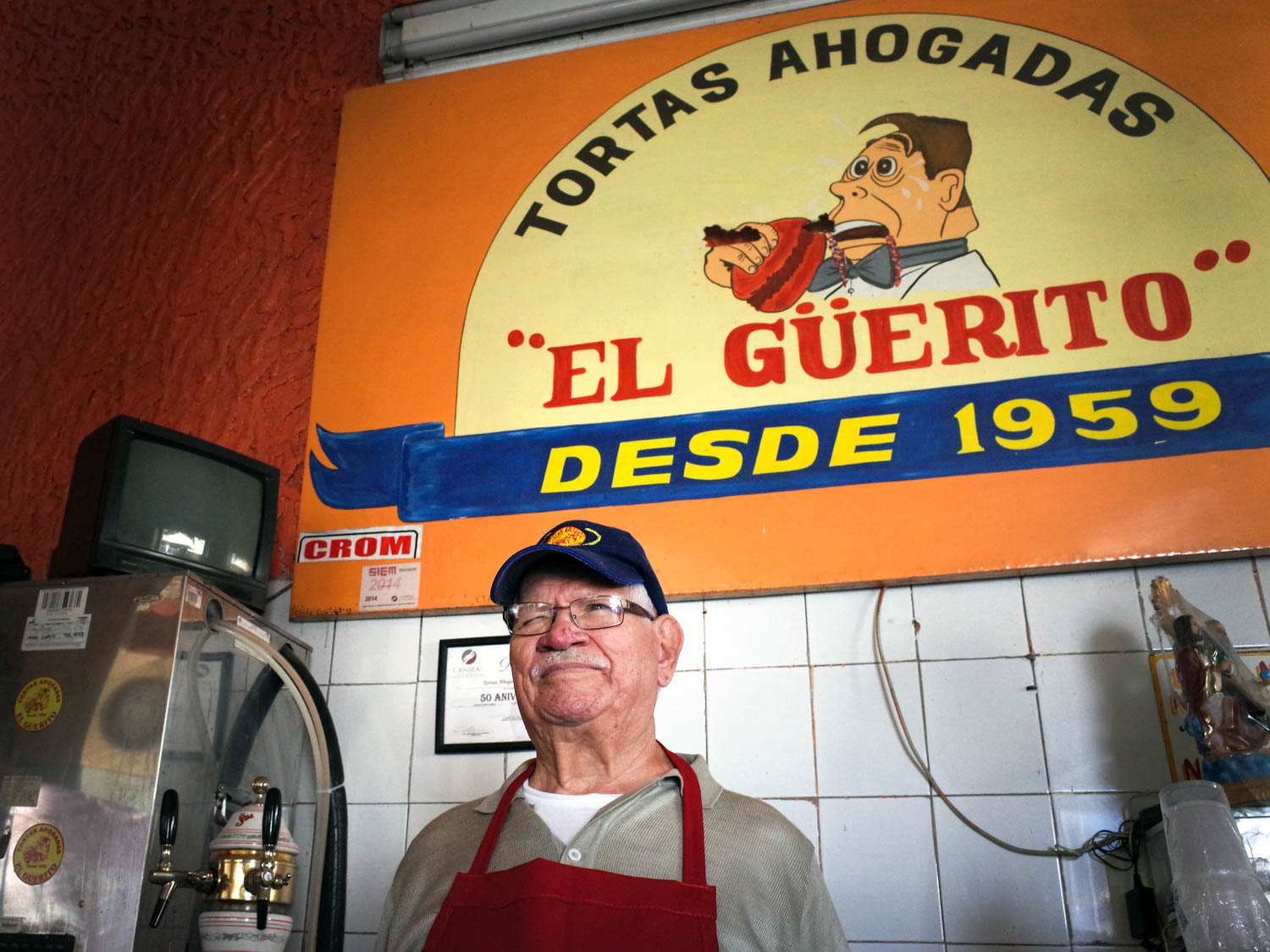 This tiny takeaway place in big food city, Guadalajara, does a famous local sarnie that’s dipped in gravy. Don Ignacio has been putting them together in this atmospheric spot since 1959 and it’s one of the originals, scouted out by our Charlie Gilpin on his ‘sub-battical’ across the US and Mexico last year. Get behind the scenes with the family who run Tortas Ahogadas and read the history of the famous Mexican ‘drowned sandwich’ – a crusty birroteis stuffed with confit pork then slathered in clove, cinnamon and cumin spicy sauce (plus extra sauces on the side).

Want more? Watch Vice’s Street Food Icons and look out for Netflix’s new series celebrating the work of chefs who run food carts and hawker stalls around the world (by the creators of Chef’s Table).