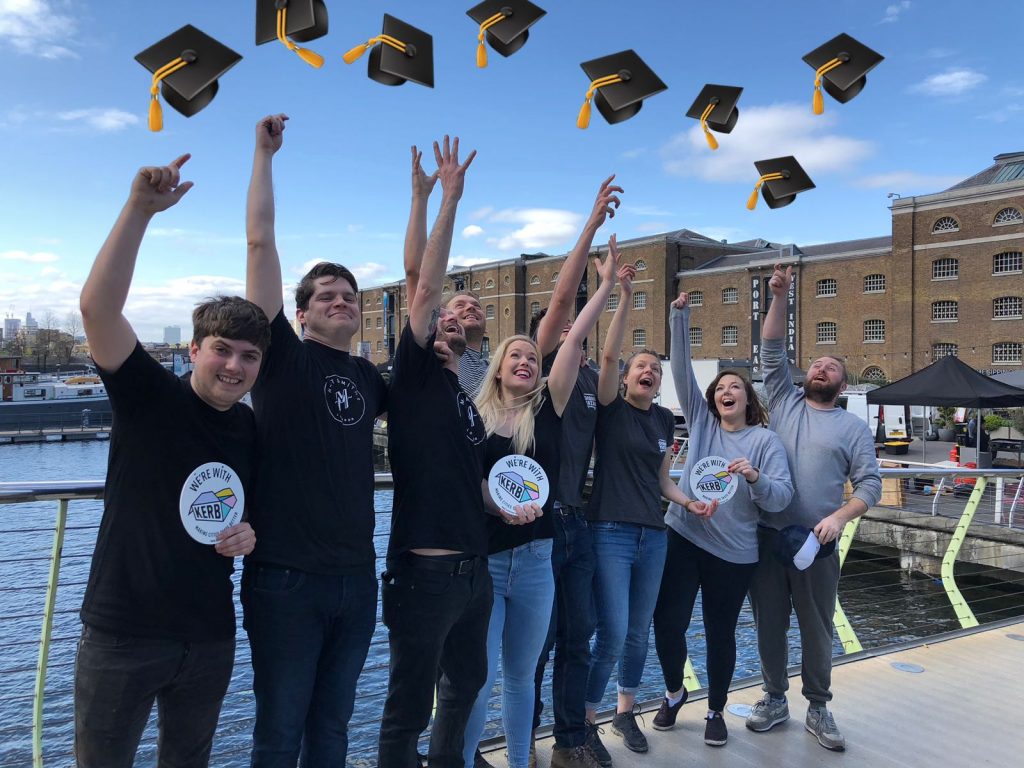 … and now we’ve got EIGHT brand new traders for you to eat today down at KERB West India Quay. Meet inKERBator fleet number five who’ll be trading every Tuesday at on the Quay (inKERBator Tuesdays) and popping up at King’s Cross Wednesday – Friday as well: 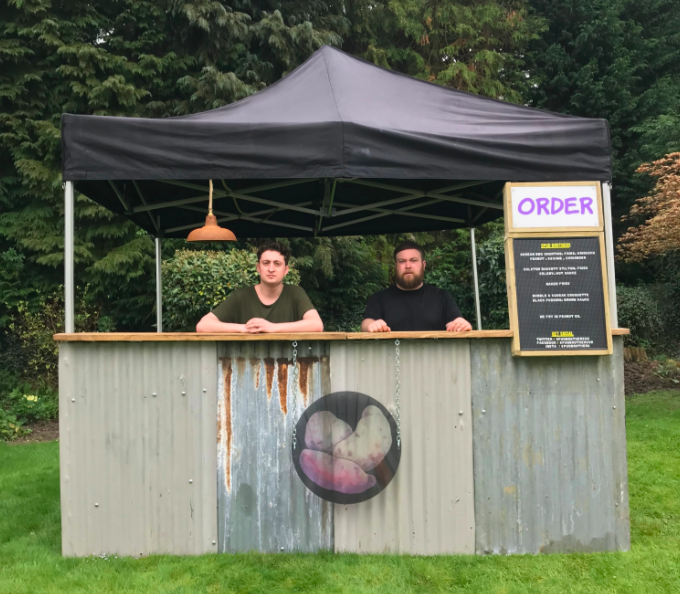 Dark horse these ones. Story: “We met whilst working in kitchens (some Michelin star) across the city and first fell in love with street food in Hong Kong. We stumbled upon what we can only describe as disused garage underneath a block of flats. At night they would open the shutters and scatter dusty plastic chairs on the street, the road and anywhere they could just to feed the public their homemade noodles and broth. it was unreal we couldn’t believe it all we could do was look on in awe. I think it was at that moment we decided to do something for us. One day we were having a “chip off” (yes it was like a 90s dance off without the glow sticks) just to see who was better at making chips and that’s how Spud Brothers was born”.

Trivia: They’re not actually brothers / their kitchen clock is permanently stuck at 10 to 9; and they can often be heard saying the word ‘Miche’ – cheffy lingo they made up to describe anything exceptional like Michelin. 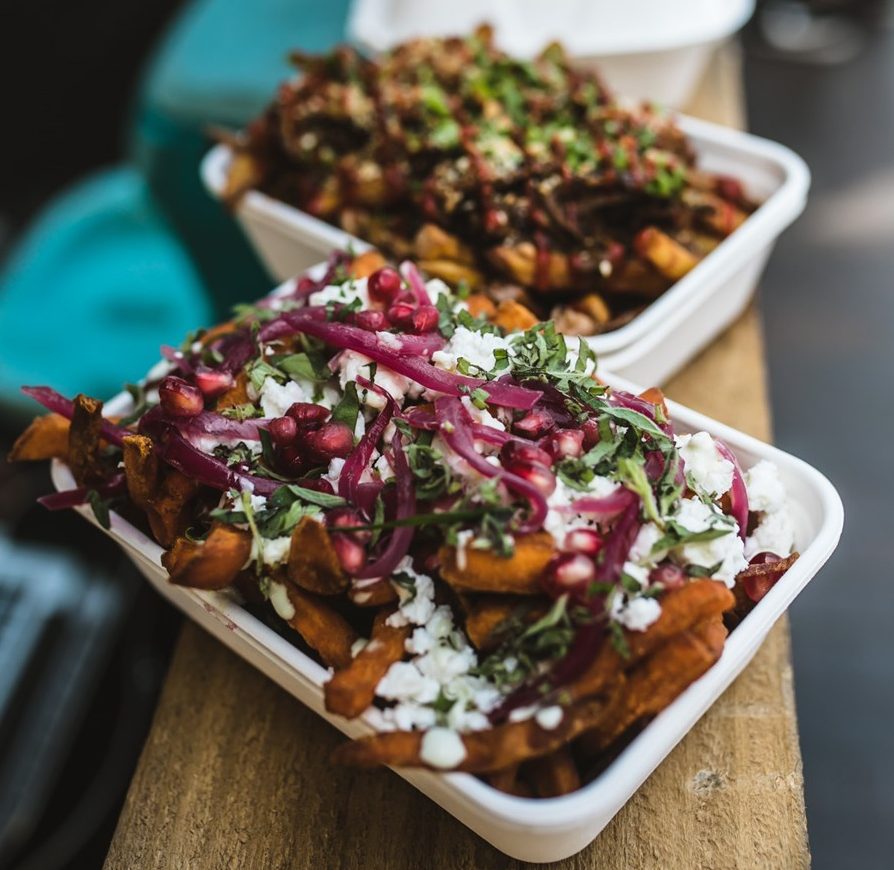 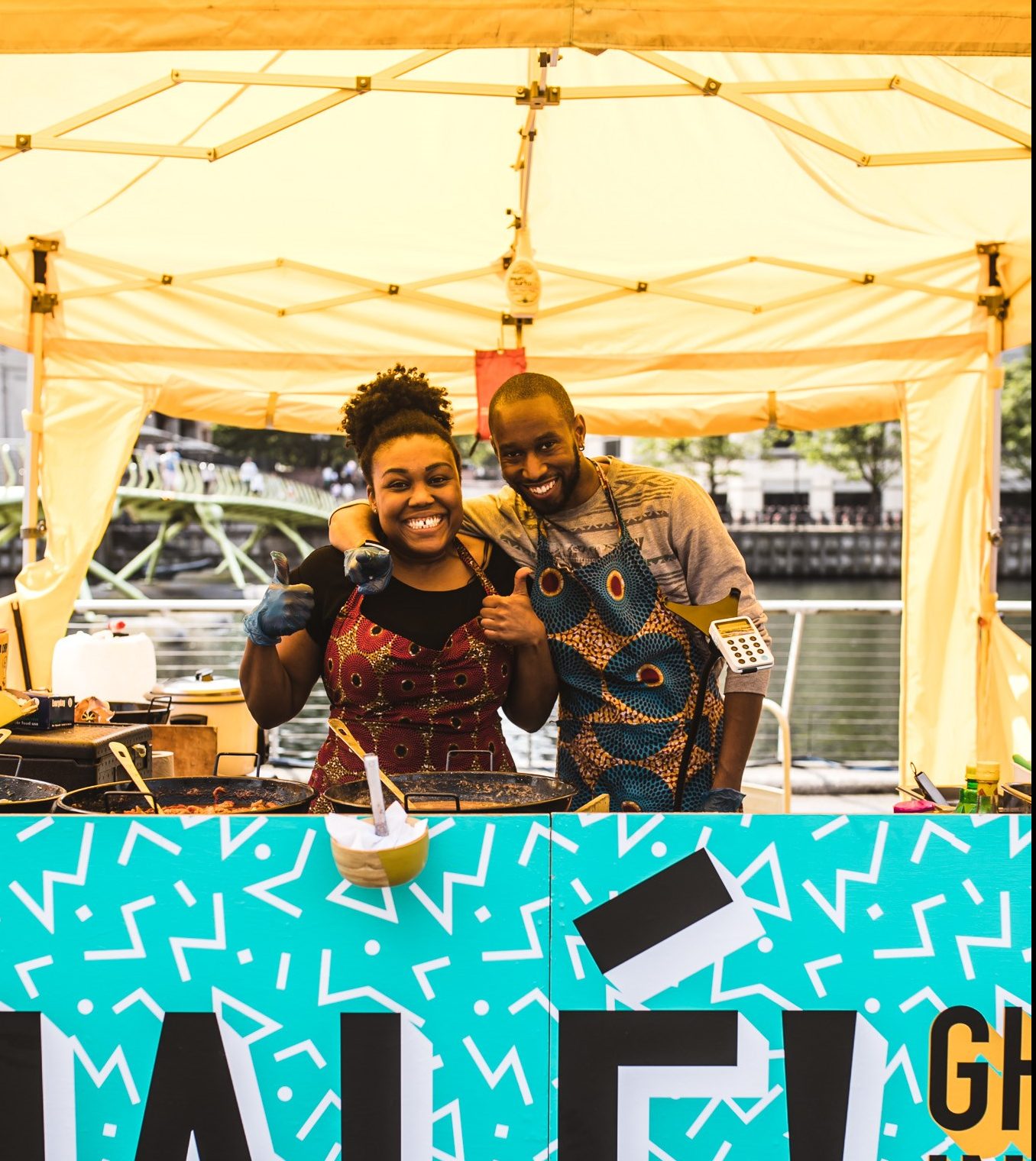 Story: Ghanaian street food with a twist. Chalé was founded by Alicia Ama in 2014, to bring flavours from her family origins of Ghana, Togo and Guyana to London’s streets. “Chale” basically translates as “let go / hell no / let’s eat!” and Ghanaian food to Alicia “is all about flavour, colour and being completely stuffed” so come down to the Quay and let them stuff you!

Trivia: Despite having peanut butter as their signature dish Alicia is allergic to peanuts! Another danger related one – Alicia had Malaria when she was three but miraculously survived. 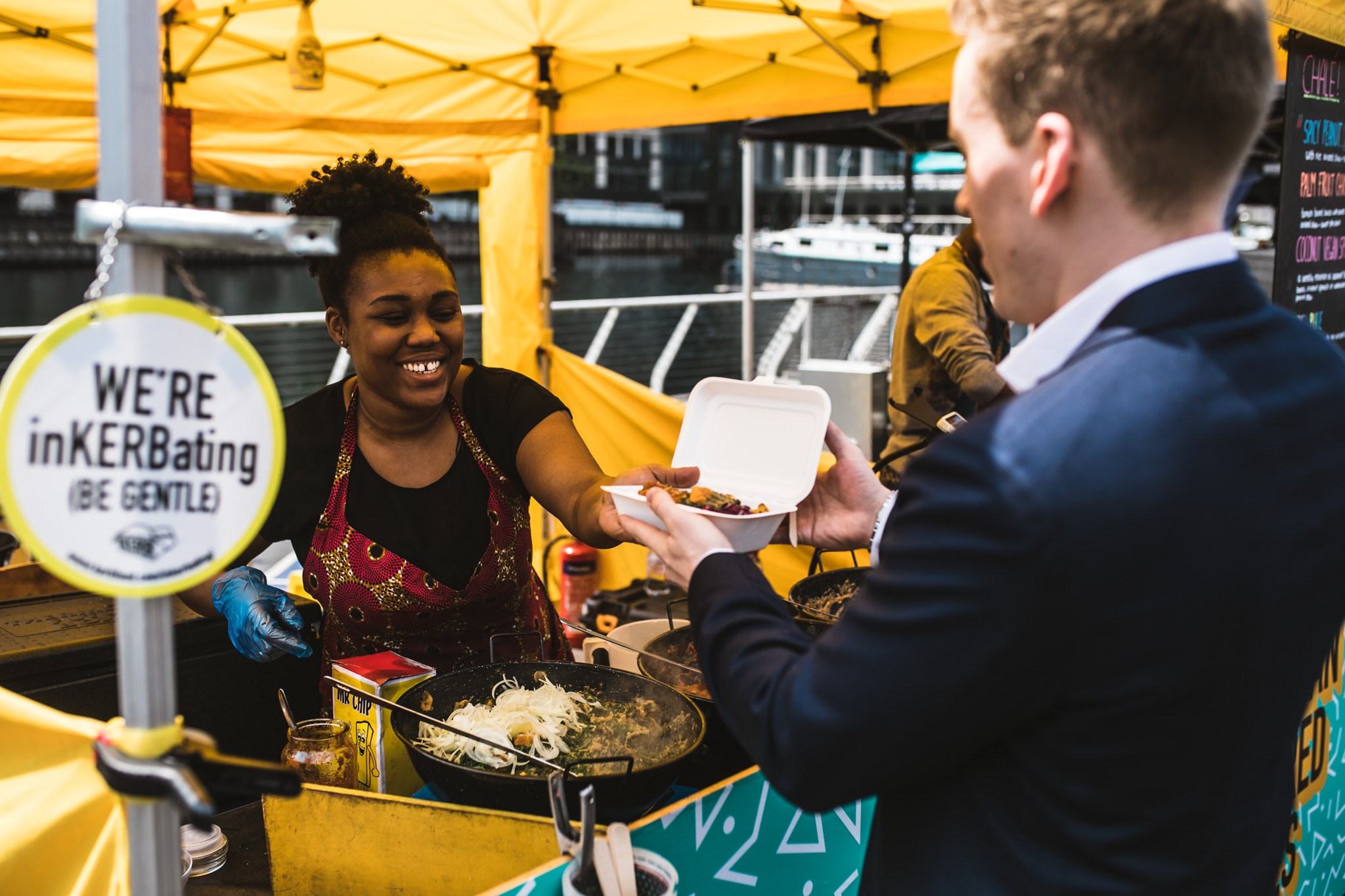 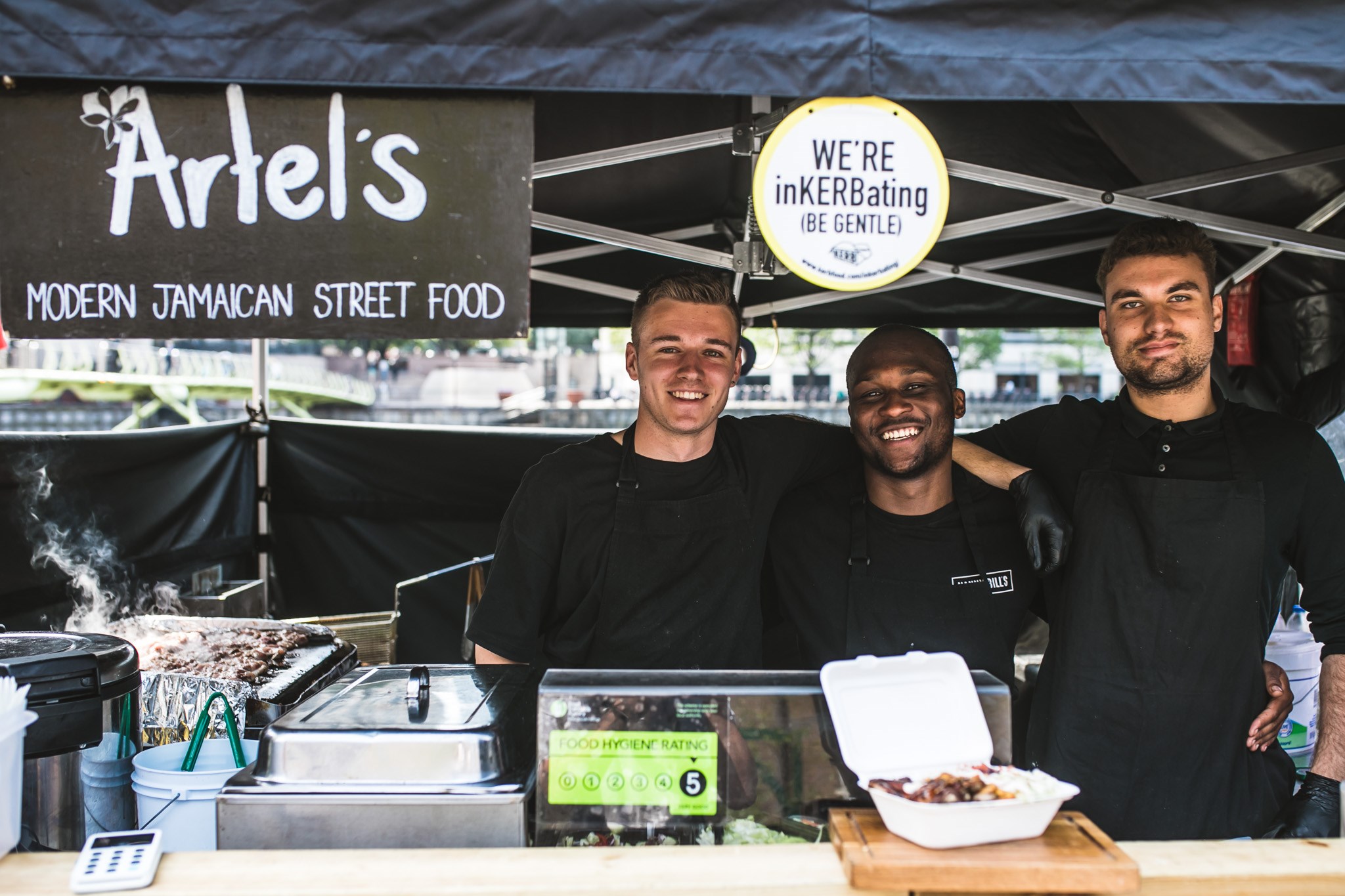 Story: Artel’s is named after Joel’s grandfather – a farmer in Kingston Jamaica and king of the jerk pitt. “Artel’s is a celebration of our family’s heritage and history and they want to continue our Grandfather’s legacy by creating fresh new dishes inspired by authentic recipes but presented in a modern way”. They currently do event catering but Joel’s “love of making strangers happy with food meeting new and interesting people every day” made them come to KERB.

Trivia: Joel’s Auntie own roosters jerk in Kingston Jamaica where they cook it out of a giant smoker for everyone to gather round and enjoy, and now Joel wants to see jerk done THIS WAY on London kerbs. (They also use sustainable sourcing wherever possible, and donate 10% of profits every year to a charity close to their hearts). 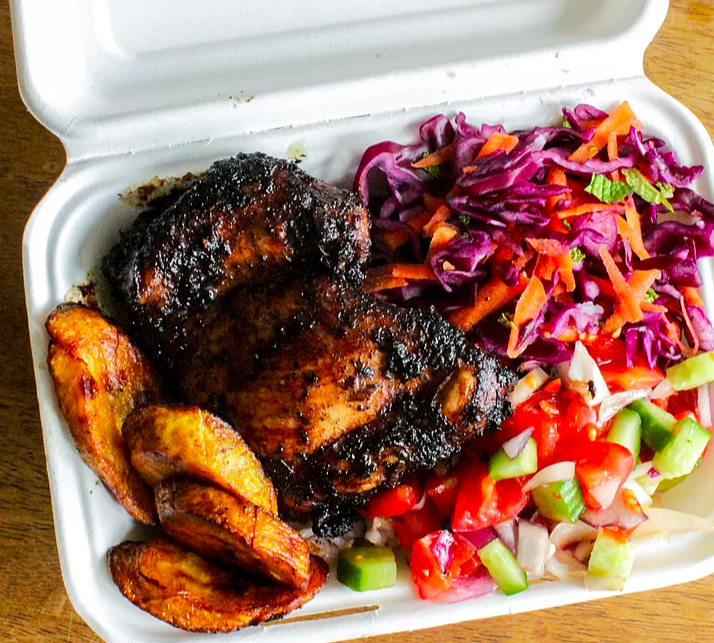 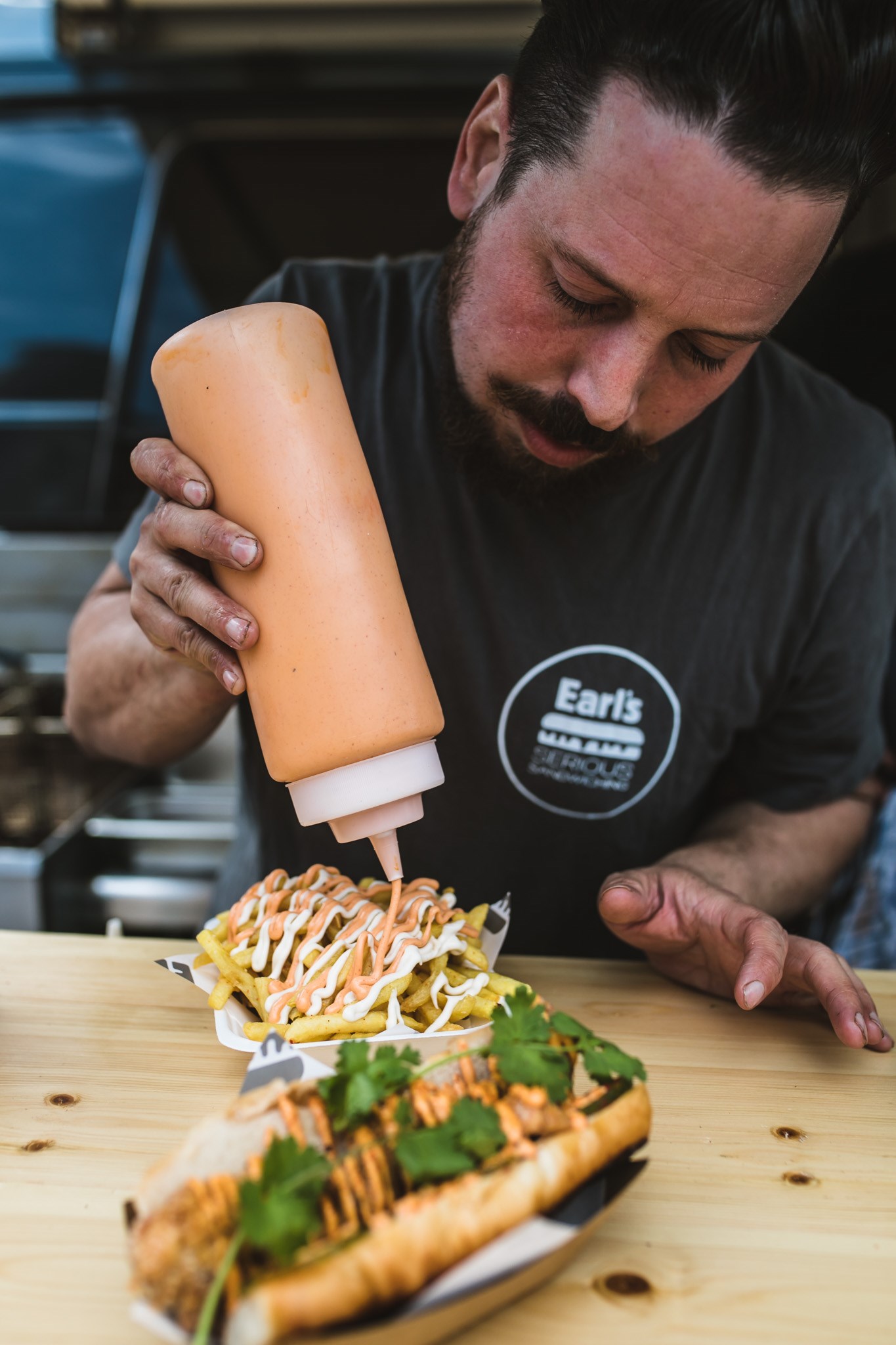 Story: Earl’s was born out of a passion to create guilty pleasure sandwiches. Founder Joe (chef and life-long sandwich enthusiast) takes inspiration from existing classics and the many sandwiches tasted on his world travels. Our street food is served from a 1979 Chevrolet Panel Truck, which has been lovingly restored and custom built to deliver these infamous sandwiches from a beautiful vessel. We do the whole sandwich thing with love, fresh ideas, and the very best ingredients, priding ourselves on leaving guests satisfied after indulging in our life’s work!

Trivia: Founder Joe Gray was once the host of a 10-part TV documentary travelling around and sampling the food in Slovenia, which was at one time the most viewed food program in the country! 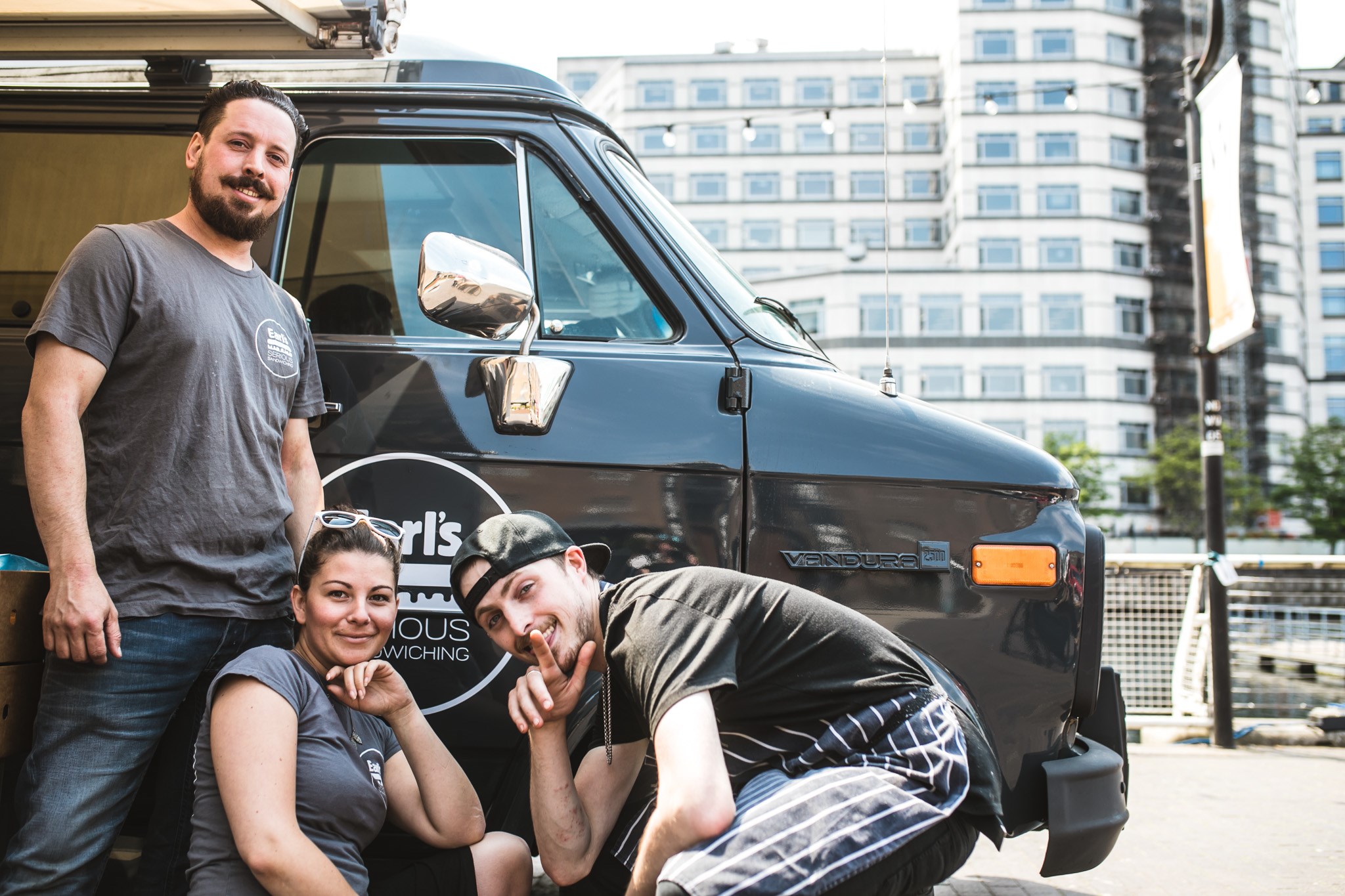 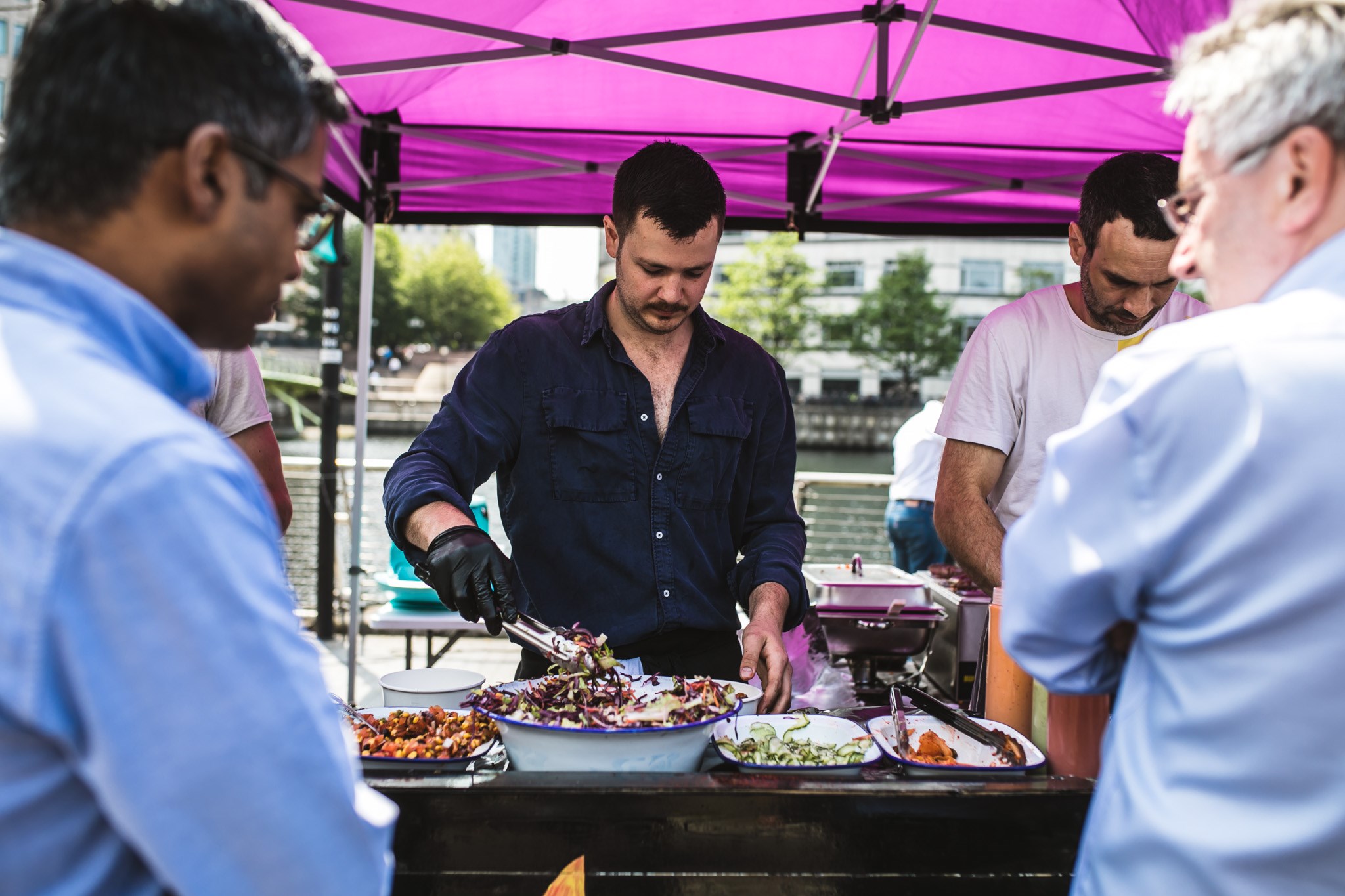 Story: Angus fell in love with Mexican-Korean fusion when working for KERB Alumni Kimchinary / Hanna. And now he’s picking up the Korean-Mex baton.  “Having worked in professional kitchens for most of my post-graduate life, I was sad by the lack of interaction between kitchen and customer. When I had the chance I would go into the restaurant to talk to the customer about their experience – which you get completely in the street food community, so I moved”

Trivia: Angus is currently undertaking a course in sustainability and is working to use recyclable material for all his packaging. If all goes well he plans to roll out a franchise model to grow and expand the business too. 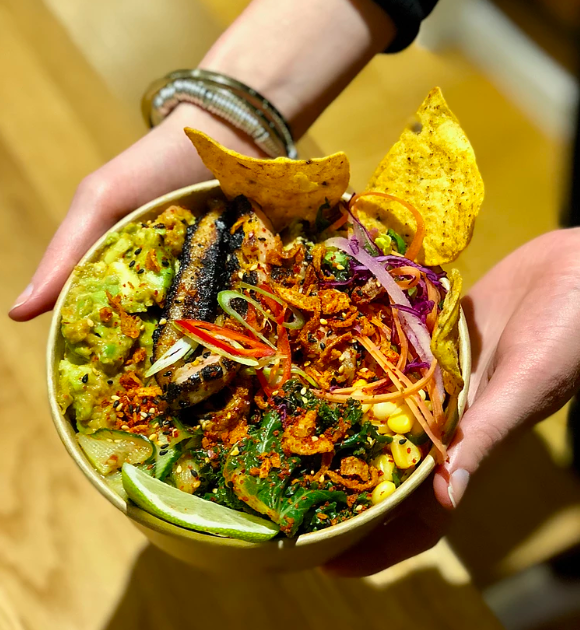 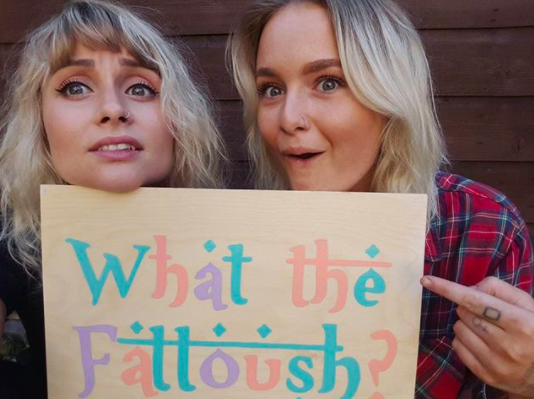 Story: “We cook delicious Palestinian food – vegan style. Everything is made from scratch. We were taught to cook Middle Eastern food by camp residents when volunteering at refugee camps across Europe and Palestine and fell in love with Middle Eastern cooking. We realised there is a gap in the market for vegan Palestinian food in London so started as a supper club fundraiser and had such a great response we thought we’d take it further. Although everything is vegan, we don’t bang on about it, it’s about the food. It’s massively important to us to represent Palestinian food in London. It sounds cliché but food is an amazing way to access a culture. Palestinian food has its own unique identity and we love sharing our take on it”.

Trivia:  We donate 10% of our profits to SkatePal, they’re an NGO that build skateparks in Palestine and teach young people to skate. 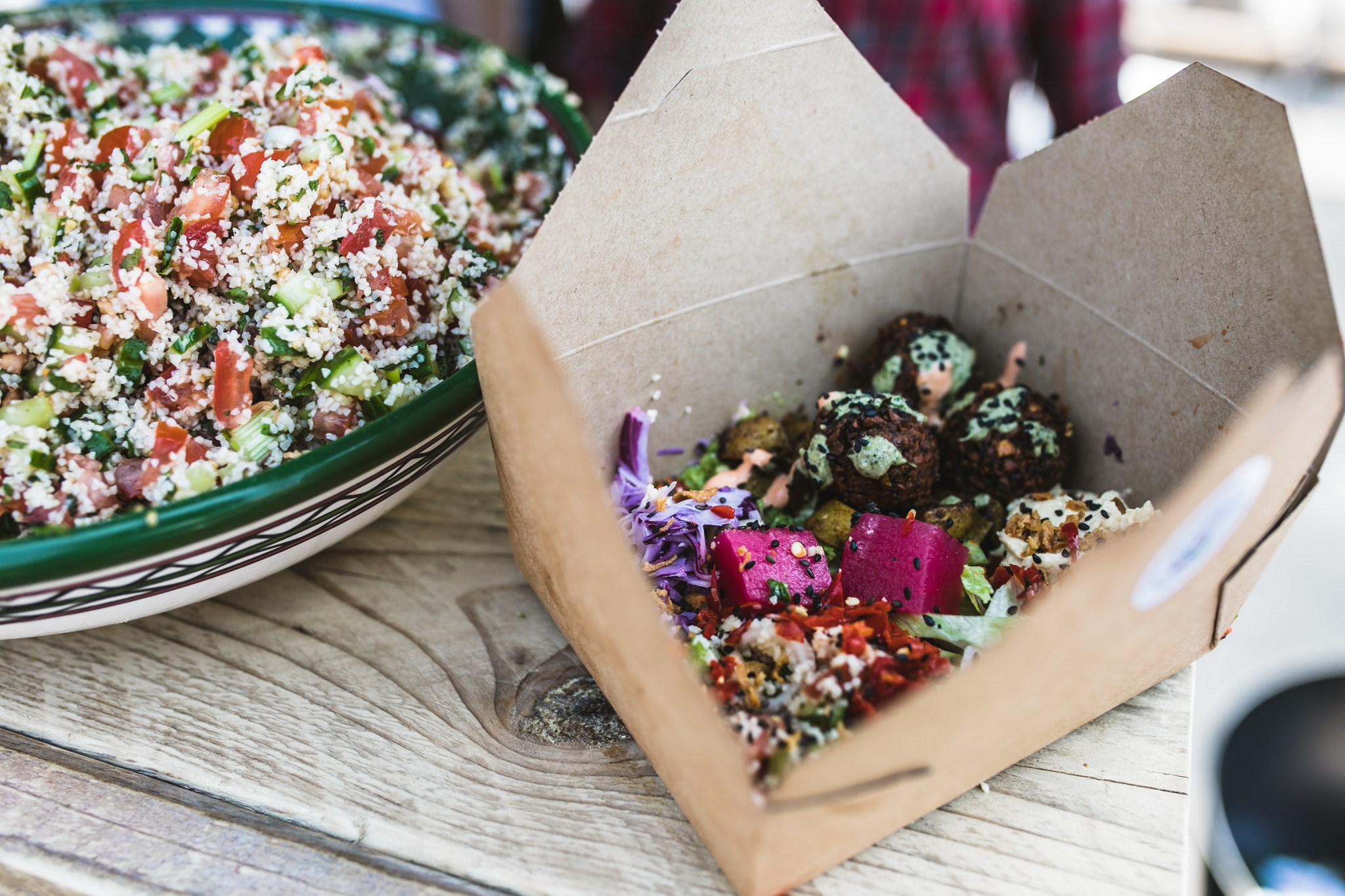 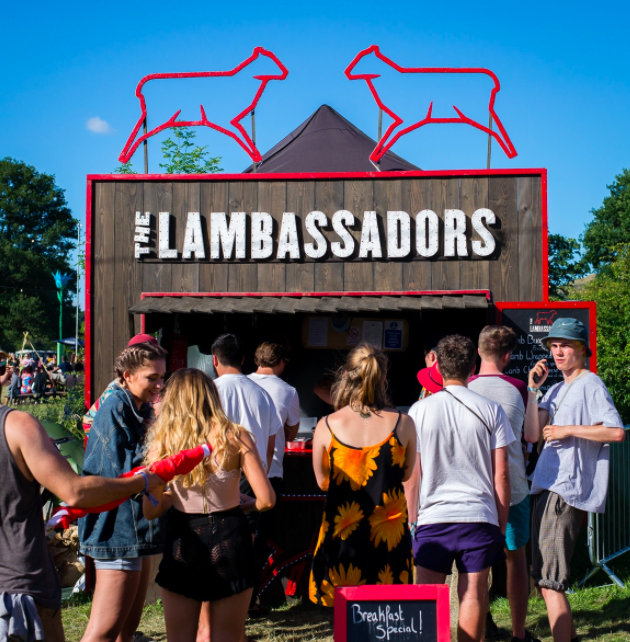 Story: “It all began on our small sheep farm in Northamptonshire. On finding out that the UK currently exports way more lamb than it imports, and with domestic lamb sales declining across the UK, we wanted to put British Lamb back on the menu in new and exciting ways. We source all our meat from our family farm, or other preferred British producers”.

Trivia: We built our own smoker out of 3 old gallon drum and lots of graft. About 100 modifications later it works as expected!? 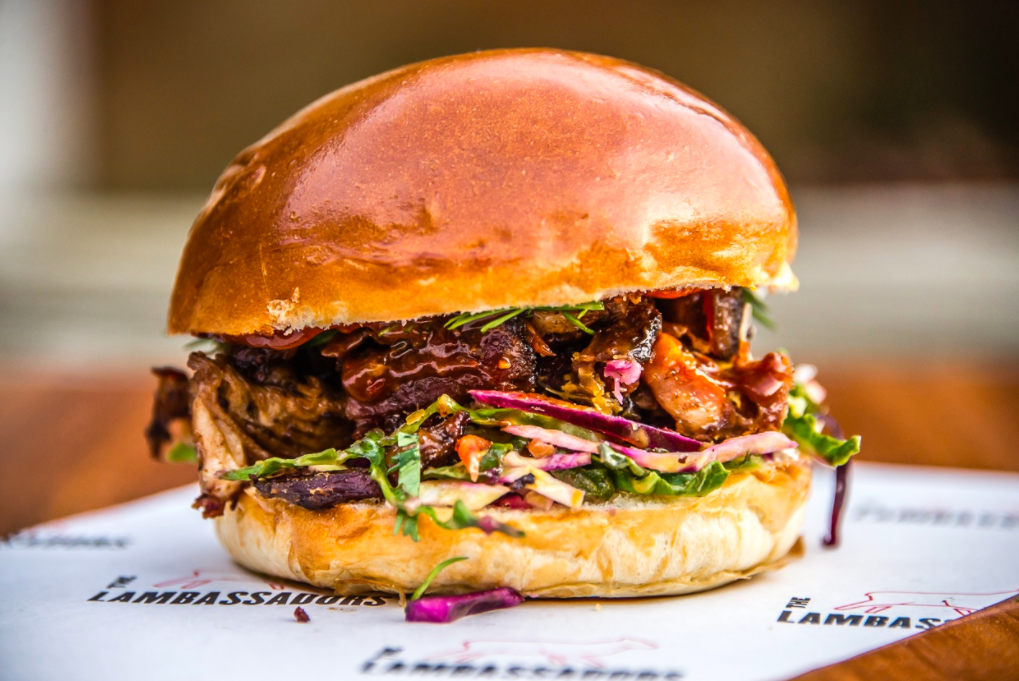 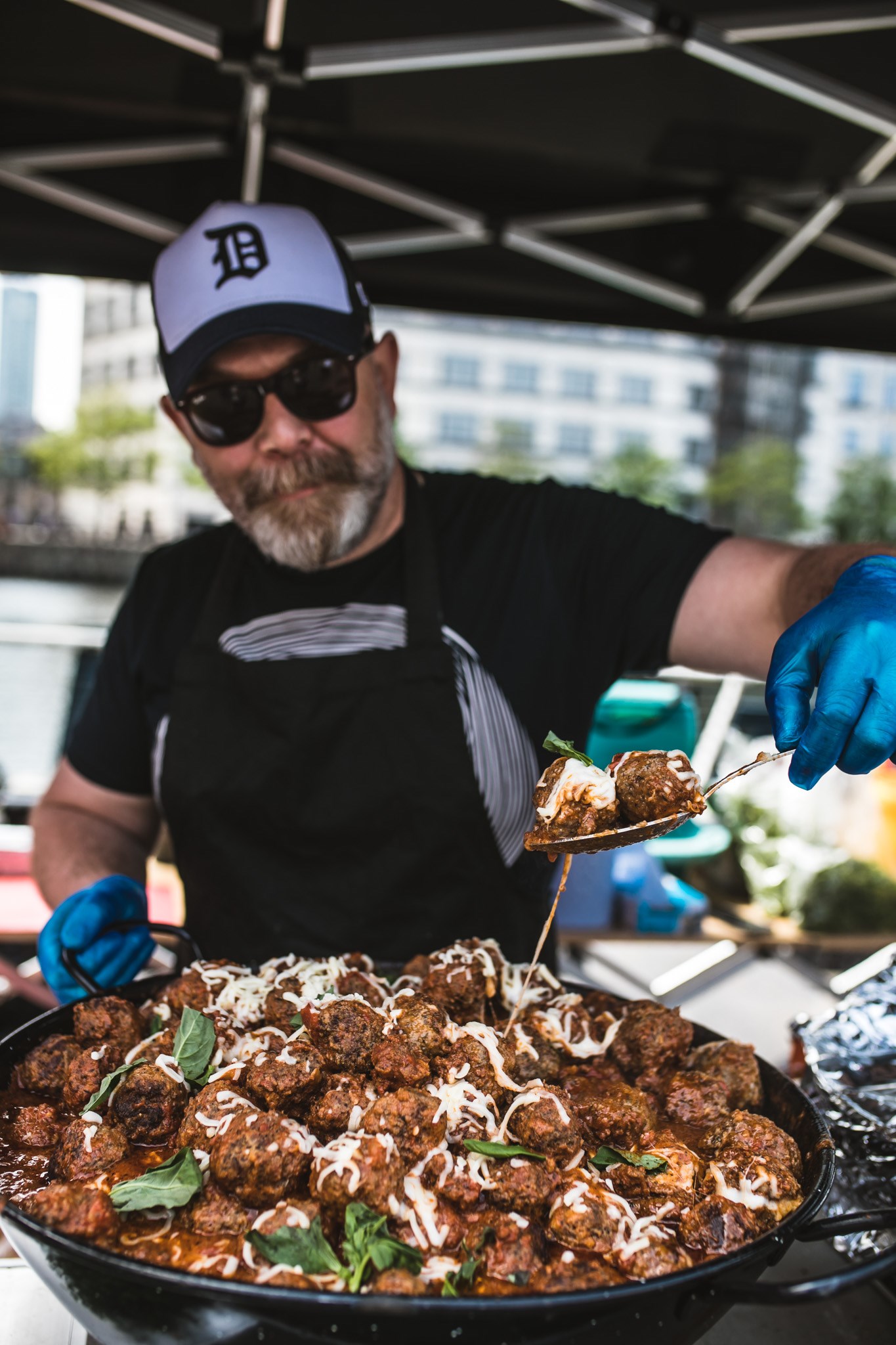 (carrying over from batch no.4)