It’s official! KERB has MOO-VED into Cowcross Yards. KERB at Cowcross Yards is the first new KERB market launch in OVER three years. The lineup is udder-ly delicious and this time it’s the lucky Farringdon lunch-timers that will be leaving the meal deals on the shelf.

We’re bringing the freshest street food talent to the yard… Come hungry and ready to ‘graze’ at the most exciting new market within the city square mile.

You herd it here first! Get to know the inKERBators who will be kicking us off…

THE KERB LINE UP

Frans grew up in Singapore. During his compulsory national service in the military, he was deployed to a rice paddy field in rural Thailand for 3 months. Here he first discovered food vendors – a ‘Mango Sticky Rice’ vendor would often visit – and 3 arduous months flew by. He fell further in love with the idea of Street Food during his time spent living in Melbourne. Rice bandits was created in 2020 during lockdown, selling mooncakes and home delivery dishes through Instagram before meeting customers at local stations to hand over a home-cooked meal. Frans celebrated the next step for rice bandits with an emotional reunion with his sister (after 3 long years), who surprised him on his first ever market with KERB. To Frans, his food tells a story, it’s an international love language. 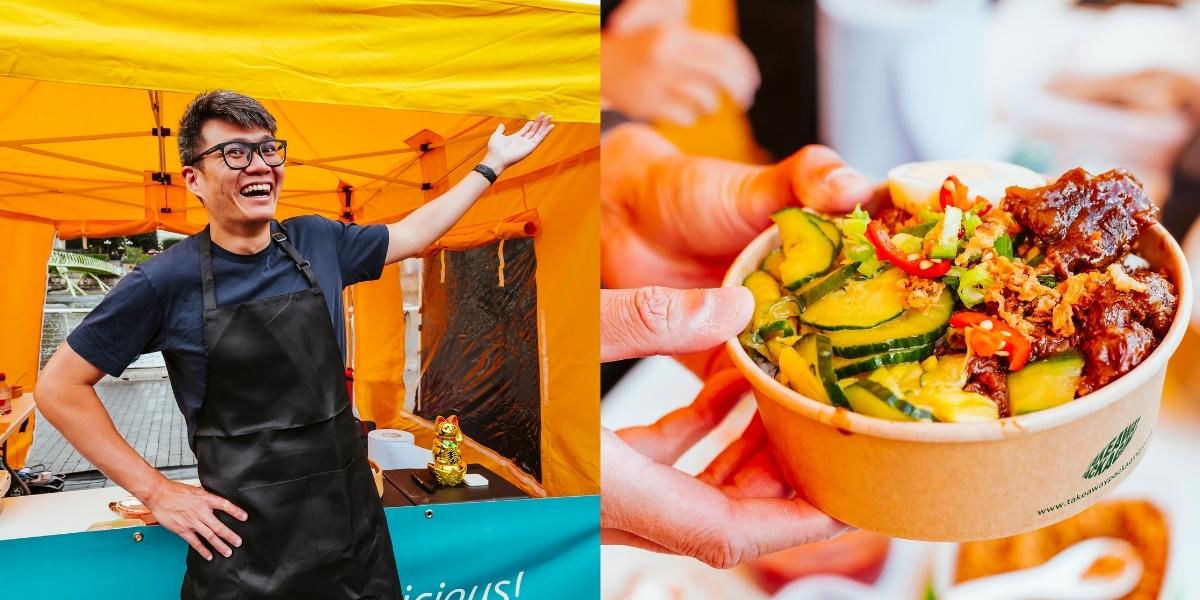 Tapas Bravas, bringing a taste of Spain to London, founded by Hugo

Hugo moved from Spain to London seven years ago, as a graphic designer looking to develop his English. But it was his passion for food and cooking that really developed! Working part time in restaurants, and in his spare time visiting street food markets, Frans noticed a gap in the market for good authentic Spanish food. The pandemic provided that nudge he needed to leave his full time job and start his own food business. And so Tapas Bravas was born, specialising in authentic Spanish tapas and paella! 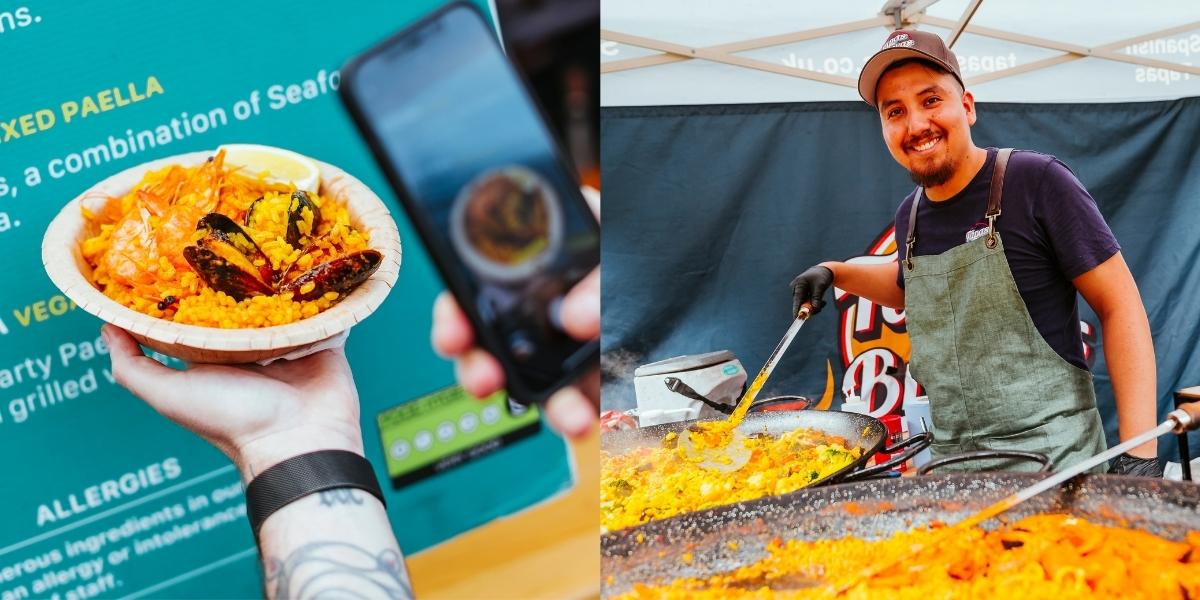 Having fled to London from their home country of Venezuela, Johana and Giovan realised that there weren’t many Venezualan options that truly represented their cuisine, and started to feel homesick. They decided to be the ones to bring a little of their Venezuelan flavour to the people of London, and all the Venezuelans that were also missing home! Papelon was born in March 2017 in the Portobello Market, and after that first day at the market their lives changed forever! What do they love? The fulfilment that the smiles and the good vibes they get from every person that tries our food.

Papelón’s signature dish: Cachapas, fresh corn smash-up tortillas, filled and grilled with gooey cheese, beans and a filling of your choice, folded as a taco. 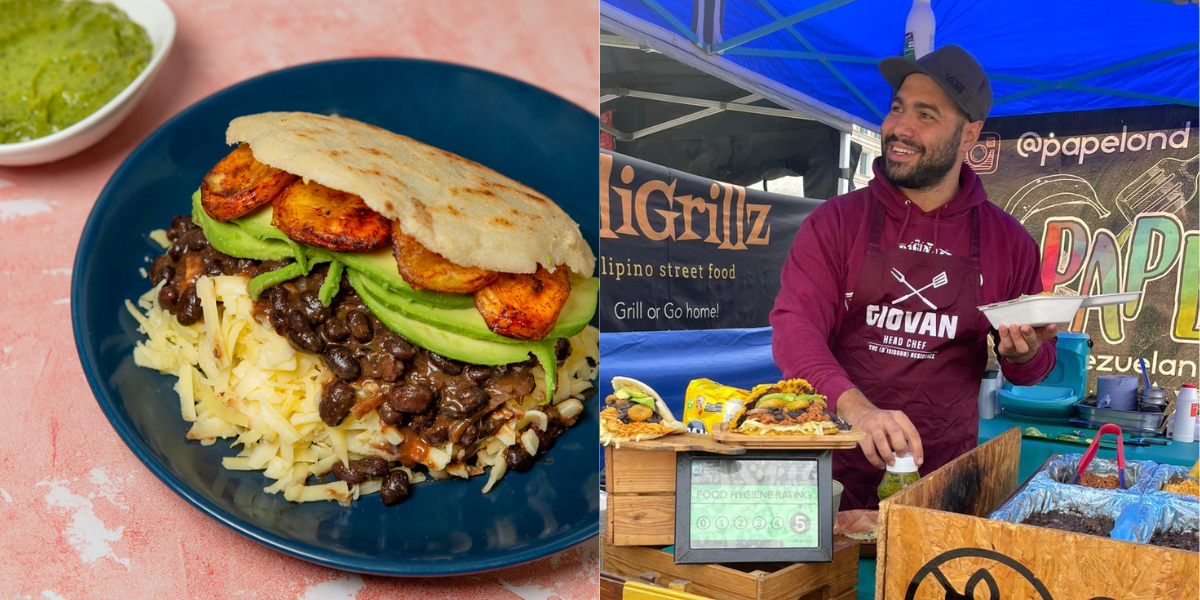 Craic Bird, come for the wings, stay for the Craic! Founded by Alan & India

This pair jumped into the street food scene after facing turbulence in their 9 to 5s as  COVID turned the world upside down. Alan had always hated having to put on a suit for work in the morning and, like many, losing his job through COVID meant that he said goodbye to office life for the final time. So Alan and India founded Craic Bird, a passion project that means they can explore their shared love of fried chicken & wings – and if we do say so ourselves, they do it well! This dynamic duo shine on the market, bring the craic and are happy to talk you through their wings and strips saucing options.

Craic Bird’s signature dish: KERB team favourite is the No.7 reserve on either wings or strips. 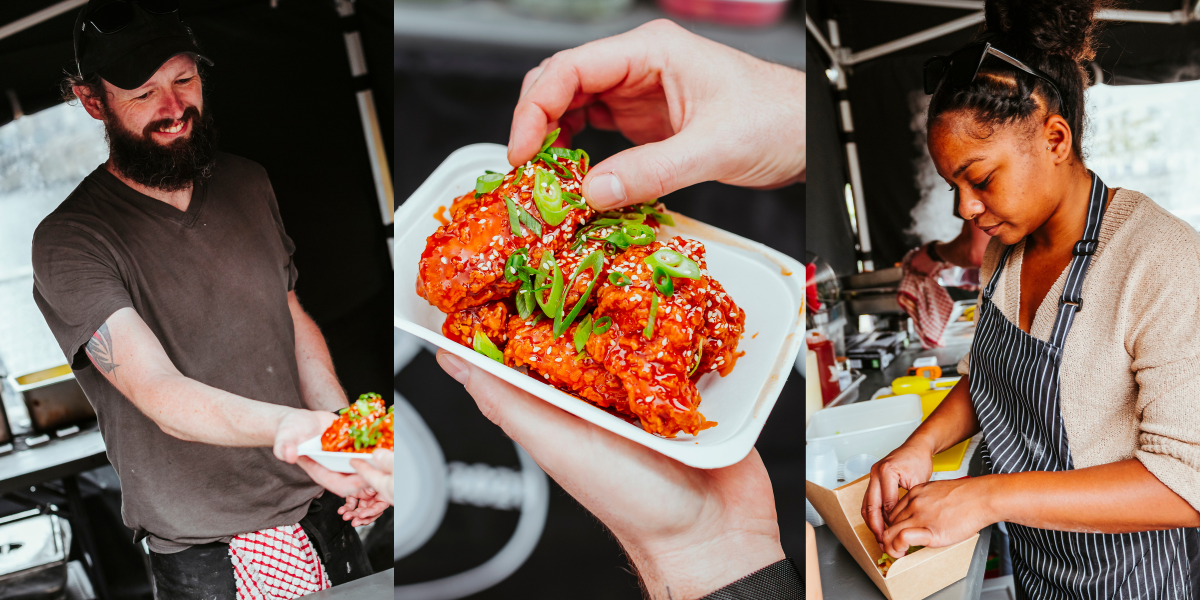 Filili started out of Subash and Sadish’s shared love for momos and flavour experiments! Both worked in the IT Industry before Filili, and the street food scene nearly missed out on their incredible Momos as they first turned their hands (and brains) to creating an app. Luckily for us, and you, they tinkered with the idea of a food business and created a tasty, unique concept. Gavin, from the KERB food team, put Filili forward for the KERB inKERBator programme after weeks of enjoying the momos with his family at his local street food spot… 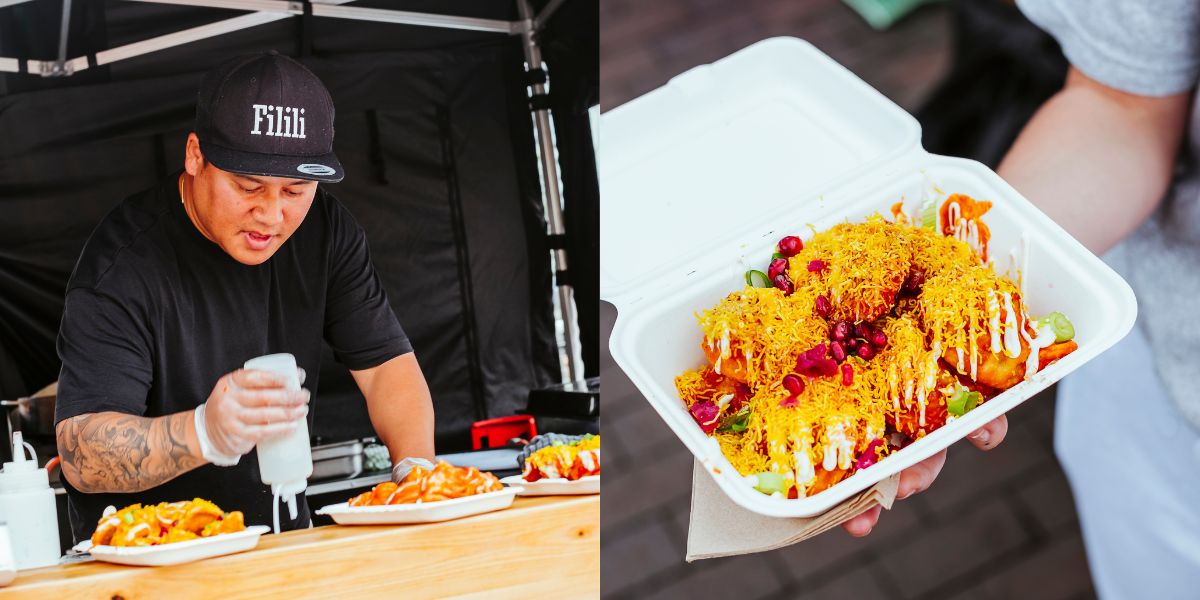 Having worked as a professional chef for over nine years, Sebastian began to lose his passion for food… the demanding hours and monotonous shifts (sometimes up to 16 hours) left him wanting a change. A favour for a friend, manning his street food stall, led to Seb & Gianfranco falling in love with the idea of starting up a street food business of his own. What do they like most about running Los Gordos? The fresh air, the fun of socialising with every customer, and the instant gratification of seeing people tuck into their tacos. And being free from the kitchen! Street food revived their passion for cooking, and now they’re serving up unique Colombian flavours in one of the best forms of street food, the taco! 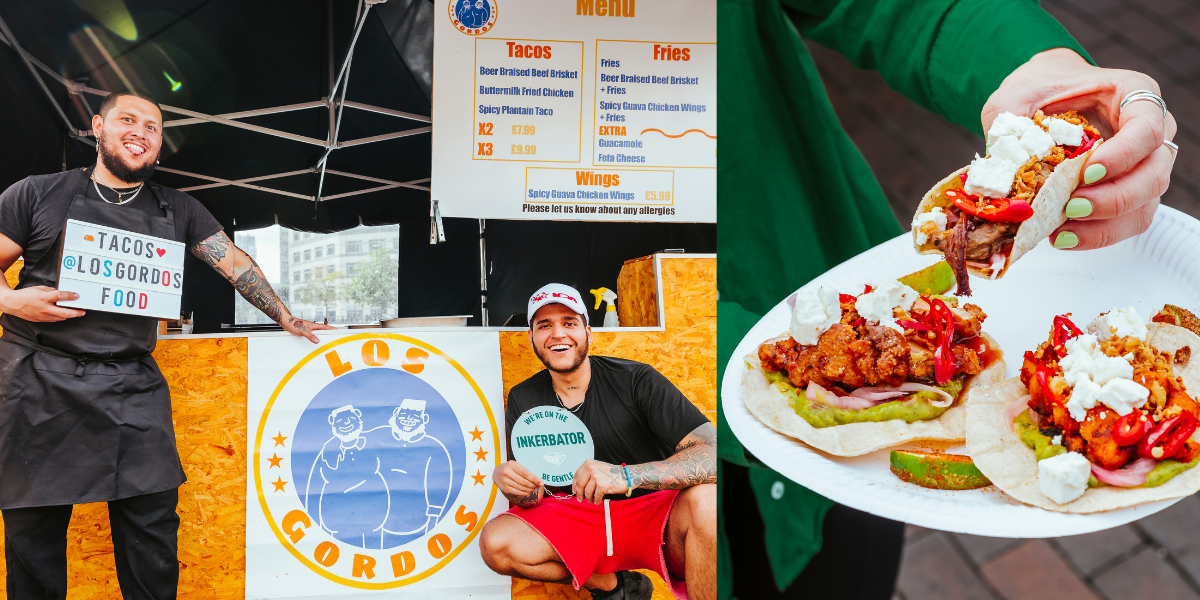 Filigrillz started in a traditional Filipino way – with backyard parties! Rey & Keziah would cook up their family BBQ recipes during big social gatherings. With friends and family, both Filipino and non Filipino, demanding more and more food, and giving them countless rave reviews about the unique and different flavours they were serving, the pair decided to go all in and give Filigrillz a try. They’re now bringing Filipino flavour to markets across London, building up a cult following of Fili-fanz as they go.

Filigrillz’s signature dish: The Boneless THUG chicken BBQ Box, chicken coated in a fresh lemongrass and ginger marinade then grilled, served up with rice and salad. Gluten free, and halal. 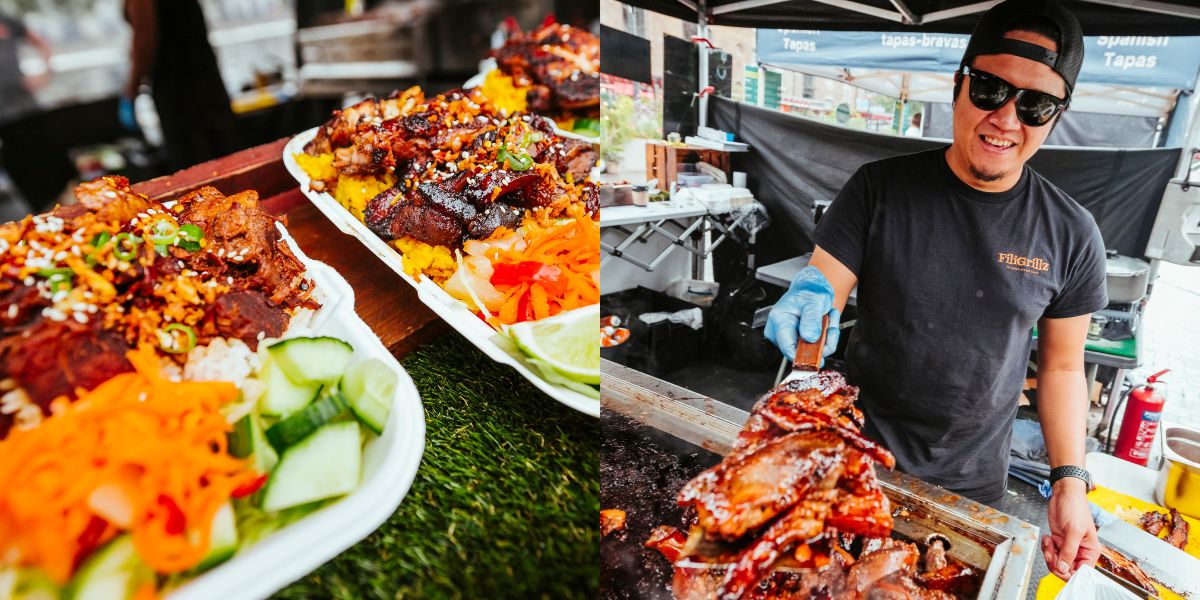 When Meatstop founder Benjamin was 11, all his pals played football. But the pitch life wasn’t for him! Whilst all his mates were tearing up the lawn, he’d be on the BBQ (and vibe control with the music). He’s always been the host, putting on BBQs and parties –  taking over his parent’s kitchen on the regular. Meatstop started out with events, and when there was a big burger boom in about 2015, a fixed site in Brentwood called out to him. Without much professional kitchen experience, burgers made sense. And now that’s Meatstop – a perfectly formed burger, made from the finest ingredients, and packed full of flavour. 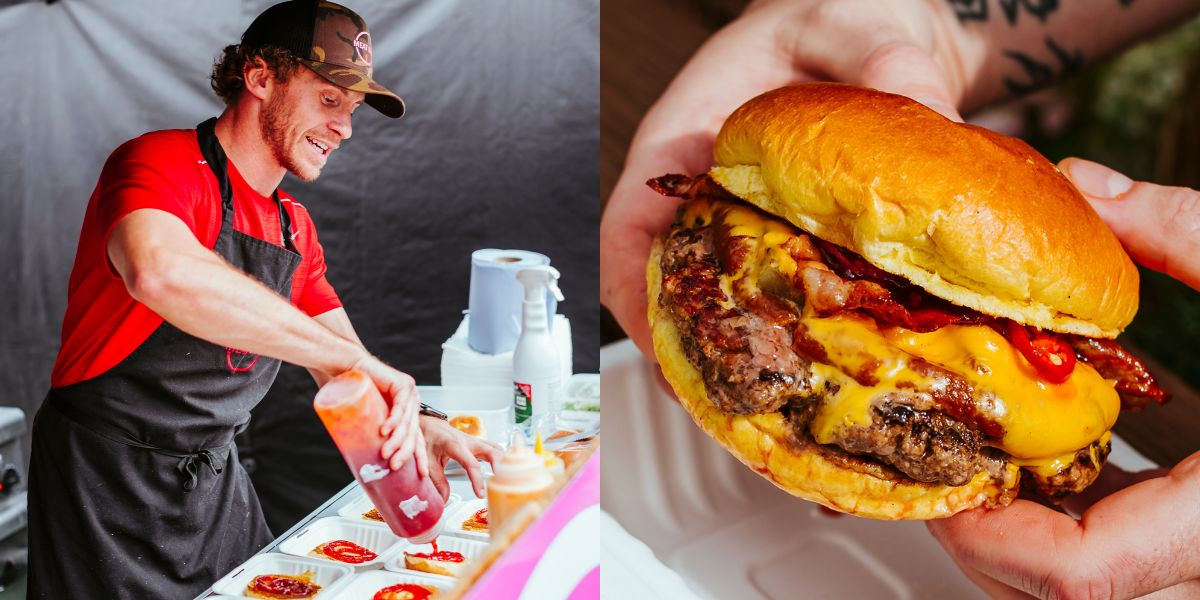 Want to keep up to date with all the latest MOOS directly from KERB at Cowcross Yard? Sign up here for weekly line-ups, exclusive offers and more.